What is diabetes remission?

Type 2 diabetes is normally treated with medication and/or diet and exercise and for many, it’s a condition that gets worse over time. Achieving diabetes remission can have a huge impact on both your diabetes and your overall health and well-being.

It’s important to note that remission isn’t a complete cure, so diabetes may still come back. It’s crucial to continue with the healthier diet and lifestyle that you adopted to achieve remission.

How can I put my diabetes into remission?

Research has shown that losing weight plays the biggest role in helping achieve remission from type 2 diabetes, either through diet and lifestyle or surgery.

Losing around 15kgs within 3 – 5 months significantly increases your chances of remission.

If you would like to put your diabetes into remission by losing weight quickly it’s important to get advice from your diabetes care team or health care professional. They can help you to do it safely, especially if you have any other health conditions, and increase your chances of successfully achieving remission.

Many people that have type 2 diabetes are carrying extra weight around their stomach. This leads to fat building up around vital organs such as the pancreas and liver which causes them to not work as effectively and results in diabetes.

Losing weight, and the fat around these organs, allows them to work properly again which can put your diabetes into remission.

The research surrounding remission is ongoing and we don’t fully understand all the factors that lead to diabetes remission. Not everybody will manage to put their diabetes into remission but losing as little as 5% of your body weight will have many positive impacts on your health.

What does the research say?

The DiRECT (Diabetes Remission Clinical Trial) trial has been looking at the impact of low-calorie diets on diabetes remission and has had some really exciting findings so far. Participants in the DiRECT trial will follow a Very Low-Calorie Diet (VLCD) of 850 calories a day for between 8 and 20 weeks. After this, they will be gradually re-introduced to normal food and will receive expert support to help them maintain their weight loss. 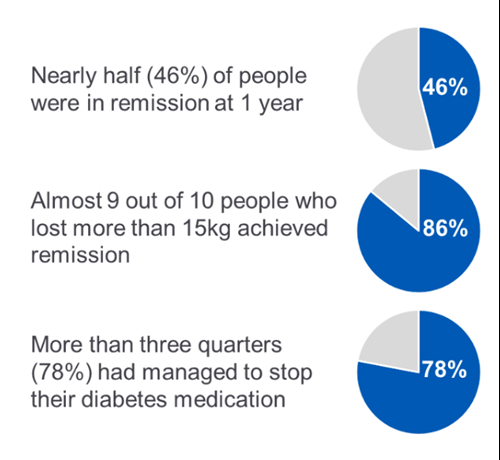 Almost nine out of ten people who lost more than 15kg were in remission at one year. The results from this study have been so encouraging that NHS England has committed to a pilot type 2 diabetes remission programme, and NHS Scotland already have programmes that are being rolled out.

For the DiRECT trial, participants followed a Very Low-Calorie Diet but that doesn’t mean to say that it’s the only method of losing weight quickly and safely to achieve diabetes remission. We’ve reviewed a couple of different diets below:

What happens after remission?

At the moment there are no definite answers as to how long it will last or how it may affect your risk of developing diabetes in the future, but the results so far look very promising. What we do know is that achieving remission has huge benefits for your health. It lowers your blood glucose levels, reduces your blood pressure and your cholesterol levels, all of which will reduce your risk of developing the complications associated with diabetes.

Even when you are in remission it’s important to still attend your normal check-ups as part of your diabetes care and continue to maintain your weight loss.